Those busy Americans have been at it again - I've received another book which must have taken a vast amount of work to create.

I should add that I pay for these things, they aren't freebies, perhaps that's why I feel free to criticise them!

This is essentially a hard copy of the excellent, enormously useful collection of epistles and gospels, which you can see here on a page of the Fraternity of St Peter's American seminary, Our Lady of Guadalupe; it was done with the help of the Windsor Latin Mass Society. On that page you can look up any Sunday of the year and download a page which sets the epistle and gospel to Chant notation. You can also listen to them being sung by FSSP clerics: a fantastic resource. 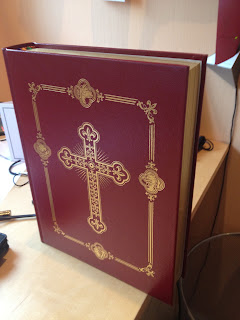 This is useful because the Missal used for Mass does not include the music for the readings (though it does have the music for the Prefaces). It assumes clerics know how to apply the (pretty simple) rules which tell you when it goes up or down a tone or two: at the end of sentences, for example, with a variation for questions, and something a little more elaborate for the end. Seminarians were once trained how to do this, and when ordained priests in parishes would have done it a lot, it would have been second nature. Things are different today, with priests and deacons being encouraged to start using the Traditional Mass for the first time and putting on, for example, a monthly Sung Mass. You can't expect them to know everything right away.

It is worth noting that the rules for singing the lections are not absolutely rigid; there is some room for differences of opinion on how they apply. Another way in which using this volume is second-best to knowing the rules and being able to apply them is the rigidity which it introduces: it obviously gives only one interpretation of the rules. Even the business of setting it to chant notation may suggest a less fluid approach to singing it. Whenever you see a line of text with a punctum over every syllable, there is a temptation to give each syllable an equal length, which is not how chant works. One just has to note these difficulties and overcome them as much as possible.

The point of this book, published by Biretta Press, is that it goes beyond a crib, which, in the form or a printed sheet, you could perhaps insert sneakily into the Missal during Mass. It is in itself a book worthy of liturgical use, with a price-tag to match: $275, plus postage. Ouch. But it really is nice, well bound, lots of reading ribbons, gilt edges. It will look good and it will last. Though thinking about the cost, bear in mind that it only includes 'Sundays, Solemnities, and Holy Week'. There will in time be another three volumes, to cover everything else.

(What are 'Solemnities'? Presumably they mean First Class feasts.) One oddity about the book is the complete absence of an introduction or preface. Not that I'm volunteering to pay more for anything not strictly necessary, but I wonder about how exactly they envisage it being used. It seems to me that it makes most sense for Solemn Mass, when the Deacon and Subdeacon sing from a different book from that on the altar. But I see this has the Collects and Postcommunions in it as well. Since it doesn't have everything else (the Ordinary and other propers) which you find in the Missal, it couldn't replace the Missal, so for the priest to use it to sing the Collect and Postcommunion, or indeed to use it to sing the lections at Missa Cantata (when they are sung from the Missal on the Altar), would require swapping books around or putting it on top of the Missal, and then taking it away again. Not impossible, but not exactly ideal either.

But then there is no ideal solution here. An altar Missal which included the chant for the lections would obviously have to be in several volumes. This book includes different tones for collects - each collect is set to the festal tone, and then the whole thing again is set to the solemn tone. It includes the little introductory formula to each reading - in full, before every single reading. It avoids awkard page turns where possible too. It really is impressive, and will make a huge different to priests and deacons who may be put off sung Masses because of the difficulties of the singing. So I say a big 'well done' to those who created this book, a real labour of love, and I recommend it. Let's hope it facilitates more Solemn Masses, and enables them to be celebrated as worthily as possible. Above: at Solemn Mass, the subdeacon sings from a copy of the Canticum Clericorum; the Missal remains on the Altar: at SS Gregory & Augustine's, Oxford.

Below: at Missa Cantata (Ash Wednesday) in the same church, the Canticorum Clericorum is quietly replaced with the Missal (at the Offertory, I think).