Mgr Loftus attacks the titles of Our Lady

Happy feast of Our Lady, Mediatrix of All Graces! It is celebrated on May 31st, Extraordinary Form calendar for Belgium and the Dominican Order.

One person not celebrating is Mgr Basil Loftus. He
writes (2nd June 2013):

'A particularly difficult problem, and one that was taken on board by the Second Vatican Council, is that not a few of Mary's titles are either of doubtful theological provenance or, even worse, theologically suspect. Thus the idea of Mary as 'co-redemptrix' is simply a non-starter - Christ alone is responsible for our Redemption. There simply isn't, nor theologically could be, any 'co-redeemer' make or female. So the title has been abandoned. And 'mediatrix of all graces is, at best, ambiguous. We have it on the authority of St Paul that Christ, and he alone, is our Mediator with the Father, from whom all graces come: "There is only one mediator between God and mankind, himself a man, Christ Jesus." (1 Tim 2:5).
Some mediation on the part of Mary is part of her role - but clearly not for "all" graces.
'So during Vatican II Cardinal Leger insisted the Church should "use accurate words and precise and sober terms to express Mary's role" (The Rhine Flows into the Tiber, p154). Apart from anything else there were ecumenical considerations to be taken into account. So the Council was quite adamant that there would be no new titles given to Mary.
Pope Paul VI cheated, and referred to Mary as "Mother of the Church" during one of his private documents during the Council...'

Not content with attacking Pope Benedict, various other popes, and the liturgy of the Church, both traditional and in 1970 Missal, Mgr Loftus now turns his sights on the Blessed Virgin Mary, seeking to strip her of some of her most cherished titles. The multiple errors, confusions, both deliberate and not, and mischevious half-truths in this short passage make me feel tired. But let's have a quick go at them.

First off, the Feast of Our Lady Mediatrix of All Graces was approved by Rome in 1920 for Belgium for May 31st. It appears as such in the 1962 Missal, which Pope Benedict XVI ruled was 'never abrogated'. (It is also in the traditional Dominican Rite Missal, for some reason it was moved to 8th May there in 1962.) So, the title was and remains fully authorised for public, as well as private, use, by the highest authority in the Church.

The title 'Mother of the Church' was given to Our Lady by Pope Paul VI, not a 'private' document, but an exercise of the Pope's teaching office. It is true that it wasn't the Second Vatican Council which did this, but Papal proclamation is the usual means of authorising Marian titles, and the notion that the Council could have attempted to forbid this is utterly ludicrous. Bl John Paul II added it to the Litany of Loreto, along with the title 'Queen of the Family' (Regina Familiae). So, again, this title is authorised by the highest authority for public, as well as private use. (Both titles are found in the Litany I include in booklets for the Family Retreat, Oxford Pilgrimage, and other events I am involved in, although they obviously aren't in the 1961 Liber Usualis version.)

(Notice the way that, unable to quote anything useful from the documents of the Council, Loftus quotes from a speech made to the Council. This obviously has no dogmatic authority whatsoever. It would be a simple matter to quote Council Fathers who opposed him. So what? He quotes from the famous liberal account of the Council, Wiltgen's The Rhine Flows into the Tiber, a handy place I suppose to find collected the most barmy liberal remarks made during the Council's deliberations.)

On the Co-Redemptrix title, this is simply a matter of recognising in Our Lady the highest possible case of co-operation in redemption which is central feature of Catholic theology. As Augustine said, 'God created us without us: but he did not will to save us without us.' (St. Augustine, Sermo 169,11,13). We can cooperation not only in our own redeptions, of course, but in those of others. Our Lady did this is to the highest degree by her fiat,'Let it be done', cooperating in the incarnation which was the means God chose to accomplish the Redemption of the human race. When we speak of co-redemption (on anyone's part) we assume that the person's actions and sufferings only have a meritorious and satisfactory power in virtue of the merit and satisfactions of Christ: so far from reducing His contribution to redemption, the possibility of 'co-redemption' manifests the power of His activity. Ultimately Loftus' logic is Protestant and would imply the abolition of the sacraments, as these involve human actions, and those human actions play a role in the redemption of the sacraments' beneficiaries. I wonder if Mgr Loftus is entirely comfortable with this aspect of Catholic theology; he frequent attacks on Pelagianism can leave one with the impression that he has gone to the opposite extreme...

Thus, St Pius X says (Encyclical Ad diem illum (1904) 14) that our Lady merited de congruo (as a fitting reward) all that Christ merited de condigno (by strict justice). This passage indicates the truth of the title 'Co-Redemptrix' and explictly gives her the title 'Mediatrix', so let's have it in full: 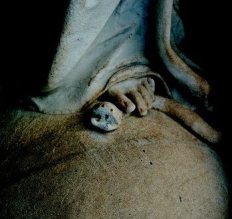 We are then, it will be seen, very far from attributing to the Mother of God a productive power of grace - a power which belongs to God alone. Yet, since Mary carries it over all in holiness and union with Jesus Christ, and has been associated by Jesus Christ in the work of redemption, she merits for us de congruo, in the language of theologians, what Jesus Christ merits for us de condigno, and she is the supreme Minister of the distribution of graces. Jesus "sitteth on the right hand of the majesty on high" (Hebrews i. b.). Mary sitteth at the right hand of her Son - a refuge so secure and a help so trusty against all dangers that we have nothing to fear or to despair of under her guidance, her patronage, her protection. (Pius IX. in Bull Ineffabilis).

Some of the papal documents are put together in the TAN version of 'This is the Faith' by Canon Ripley; the Wikipedia page on the title Co-Redemptrix is actually not bad; nor is their page on Mediatrix.