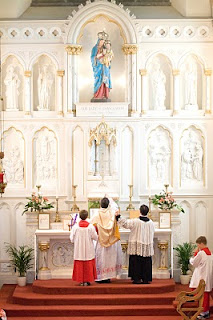 The Latin Mass Society's annual Pilgrimage to Our Lady of Consolation at West Grinstead, taking place this year on Saturday 20th July with Sung Mass at 12noon, is also an opportunity to visit the grave of Hillaire Belloc, which is next to the church.

This year the Pilgrimage will be celebrated by the veteran Bellocian Father John Emerson, and will be followed by prayers at Belloc's grave and a French military trumpet piece to rouse the spirits. In the evening there will be folk music at a nearby pub.

On 30th July, there'll be an event centred around Belloc's friend GK Chesterton. From the GK Chesterton Society:

"This year's GK Chesterton Pilgrimage will be on Tuesday 30th July. Meeting outside St George's C of E Church, Aubrey Walk, London, W8 7JG where GKC was Baptised as a baby. Then at 8am start walking to Uxbridge (15 miles approx).

"1.30pm Old Rite Mass, in thanksgiving for Chesterton's Conversion, which took place 91 years ago on this day. Our Lady of Lourdes and St Michael, Osborn Road, Uxbridge, UB8 1UE. You are welcome to attend the Mass even if you are not doing the walk. Walk on to Beaconsfield (10 miles approx) where Chesterton lived, converted, died and is buried. Then we will say the prayer for the Beatification of GK Chesterton at his graveside. You can find the prayer here; http://www.catholicgkchestertonsociety.co.uk/

"For more details or to join the pilgrimage emailcatholicgkcsociety@yahoo.co.uk or DM on Twitter and/or follow on the day, @Stuart1927 "

"Have we now, [seventy-eight] years after Chesterton's death, reached a kind of tipping point in his reputation, of the same kind that Newman's reputation reached, leading to the opening of his cause in 1959, seventy-eight years after his death?" Dr William Oddie
Posted by Joseph Shaw at 6:00 pm