Universae Ecclesiae and the Office: a reply to Mgr Wadsworth

Can priests mix and match the old and new Breviaries?

Mgr Andrew Wadsworth, very much a friend of the Traditional Mass (and the Latin Mass Society) and recently most famous as Executive Director of ICEL, and a key person in the preparation of the new translation of the 1970 Missal, raised an interesting question about wording of Universae Ecclesiae on the 1962 Office, in the comments on my post about our new translation of Universae Ecclesiae.
He wrote:

This project is an excellent idea and a real opportunity to consider how some of the provisions of this important document can be applied.

I'm not sure that your literal translation of para 32 supports the idea that those bound to the recitation of the office may use either one form or the other at whim. While we understand that it is always possible to fulfil this obligation by assisting at isolated celebrations such as Vespers, Compline, Matins or one of the little hours in either form, I think this clarifiction is actually to ensure that combinations of the two forms are not habitually used on a daily basis.

For instance, I would imagine that the injuction "quidem integre et Latino sermone" suggests that it is not licit for a priest to pray Office of Readings everyday from the Liturgia horarum and then to say the days hours from the Breviarium Romanum. In this way, the integrity of the day's office would be continually compromised and the basic principle of praying of the whole psalter rendered continually impossible (in either form). A person who is not obliged to the entire office obviously has greater liberty. The Latinists who prepared the translation have replied as follows.

Latinist number 1: My view is that each of the two interpretations is technically 'probable'; and that, accordingly, one can invoke the principle that a lex dubia does not constrain.

The idea that one might lawfully mix up the two uses is supported by Laudis Canticum of Paul VI, 1970, giving bishops the power to allow priests with age-related or other problems "Breviarium Romanum, quod antea in usu erat, sive ex toto siveex parte retinere". So, even if Mgr Wadsworth is right, all a priest who wishes to oscillate between the uses needs to do is to get a faculty from his bishop under the Pauline legislation!

Vat trans: ...gives clerics the faculty to use the Breviarium Romanum in effect in 1962, which is to be prayed entirely and in the Latin language.


'Slavish' trans: To all clerics is granted the faculty of reciting the Roman Breviary of the year 1962 ....., and, what is more, entirely and in the Latin language.

The meaning of s. 32 depends on quidem. The force, to me, seems to be: “and indeed they may use it entirely and do so in Latin.” “May use”, because we are talking of a faculty, not a requirement. Quidem can mean “certainly” (L & S, II), and seems to be intended to remove any doubt that might exist whether clerics can use it all and nothing but, and are not required to say the occasional hour in the OF or in the vernacular. But it does not seem to stop clerics doing the latter if they wish.

Yet I concede that quidem (L & S, B.2) can accompany a qualificative or opposing thought: “but, yet, however”. In this case the clause could be interpreted in a restrictive sense- “it’s all, and in Latin, or nothing”.“Quidem” is untranslated in the Vatican version, except perhaps by implication. “What is more” is intended to bring out the generosity of the concession, not to make it more restrictive – and this in a document whose entire purpose is surely to be generous. 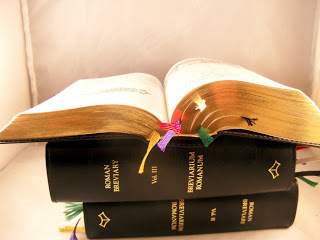 Latinist number 2:
I am tempted to write “obviously” for “quidem”: - you don’t need some kind of extra permission to recite the whole thing in the EF rather than just part of it, or to use Latin rather than the vernacular, though (if you wanted) you could do part of it only, and in the vernacular. For this nuance, how about the Preface for Easter? - Te quidem Dne omni tempore sed in hoc... “Given that it is you, Lord, that we are talking about, it is “obviously” right that we preach you all the time, but all the more so now...”

Nevertheless, if I am wrong, and Mgr Wadsworth is right to suggest that the legislator wished to be restrictive, it seems to me that the legislator has not managed so to express himself (and then lex dubia non obligat). For he could very easily have been clearer: dummodo officium totius diei recitent integrum et solo Latino sermone, or the like.Mgr Wadsworth’s point that a carte blanche to mix the EF and OF offices would compromise the integrity of the day’s office is reasonable enough. On the other hand a priest who daily says the EF mass and recites the OF office (or, for that matter, vice versa) would also be doing this – and this is certainly allowed by the legislator.
Posted by Joseph Shaw at 11:24 am