In the last Mass of Ages (not the one at the printers right now) I reviewed a reprint of Ronald Knox's translation of the Bible. One of the things I learned along the way was about the differences between the 'old', 1582 Douai-Rheims and the version we all know, the one revised by Bishop Challoner.

The original Douai-Rheims stuck extremely close to the Latin, in order to exclude any possible charge of bringing in its own interpretation - as they (with some justice) criticised early Protestant Bibles for doing. The result was something which did not always look very much like English, and Challoner, a convert Anglican brought up on the Authorised Version, set about in a somewhat haphazard way to improve the style, in the direction of the AV.

Since the old Douai-Rheims is very hard to find in printed form, I was delighted to hear of a website with the whole New Testament on it. You can see it here.

From my first glances at it, it doesn't look too difficult to read - if you leave aside the long 's' and the funny Ws made out of two vs. VVell deferving of our gratitude, I think, are the exiled scholars who brought us this. 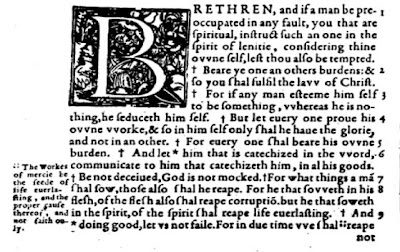