The Crisis and Catechesis

More than once I have aired the disagreement which exists between Traditionalists, or most of them, and Daphne McLeod and some of her supporters, about What Went Wrong. Mrs McLeod insists that it wasn't the liturgy which caused the crisis in the Church, lapsation and so on, but the new catechesis which was imposed on schools in the wake of the Council.

She certainly has a point about the importance of teaching the Faith. The chart to the left is just staggering; it is brand new research from here.

The Traditionalist instinct, however, that the post-Conciliar liturgy had something to do with it, has an important supporter: Pope Benedict XVI. Writing before his election, he explained:
I am convinced that the ecclesial crisis in which we find ourselves today depends in great part upon the collapse of the liturgy, which at times is actually being conceived of etsi Deus non daretur: as though in the liturgy it did not matter any more whether God exists and whether He speaks to us and listens to us.
But if in the liturgy the communion of faith no longer appears, nor the universal unity of the Church and of her history, nor the mystery of the living Christ, where is it that the Church still appears in her spiritual substance?

Of course this is not ex cathedra, we are free to disagree. But Pope Benedict puts his finger on something important: that the liturgy has a catechetical aspect, it incarnates Christ for us.

It is interesting to ask if the statistics the LMS has produced which illustrate the crisis in the Church so vividly help answer the question. Here are a couple of indicative ones: click to enlarge.

Baptisms per 1,000 Catholic compared to live birth per 1,000 of the total population of England and Wales. This is essentially a graph comparing the birth rate of Catholics and non-Catholics. Catholics had more children than non-Catholics until the level started to plunge in 1964. It bottomed out in the late 1970s. The graph suggests that from then to the present, the Catholic birth rates is slightly ahead of the general population, consistent with what one would expect.

Catholic marriages as a percentage of all marriages. It was rising steadily from before the First World War, and peaked in 1960. It then started to plunge at a truly alarming rate - even more alarming when one considers that marriage in the general population declined steeply after 1970. 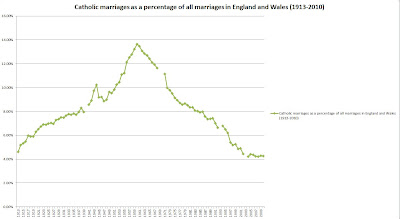 What do these show? Two things.

First, the decline started before Catholic teachers were re-programmed in how to teach the Faith. This re-programming, in which RE teachers from Catholic schools were sent on special courses, began in about 1968.

Second, the decline affected adult Catholics, from its very beginning, and not only those who were at school in the late 1960s onwards. The people getting married and having children - or not - in the course of the 1960s and early 1970s had not, mostly, heard the new catechetics when they had been at school.

It will be pointed out, of course, that the promulgation of the New Order of Mass also came after the peak in both cases: in late 1969. This is true, but the disruption to Catholic liturgical life had started long before that. Latin started to disappear in 1965. Popular devotions were under attack in the later 1950s; liturgical experiments, such as the Dialogue Mass, celebration versus populum, and vernacular readings, were rife; things were getting very touchy-feely. The famous stability of the Catholic liturgy was fraying at the edges, at the same time, and for the same reasons, as the famous stability of Catholic discipline.

And it was this fraying of discipline, on the subject of contraception, which is the key here. Adult Catholics, taught in the old way, fell for the glib nonsense of trendy theologians, who managed to create a sense that the teaching was about to change in the run-up to Humanae Vitae in 1968, and then presented that document as an intolerable imposition.


It is pointless to ask what would have happened if the liturgy or catechesis had been maintained throughout this period. The destruction of catechesis, the collapse of the liturgy, and the disappearance of moral and theological discipline all happened together because they had to. The Old Mass was too bound up with the old theology for it to be tolerated by the new, dissenting theologians. So, obviously, was the old catechesis. You can't deny personal sin and then comfortably attend, or celebrate, a Traditional Mass, with the double confiteor and everything else. You can't deny the magisterium's development of arguments against contraception and submit oneself to the development of the liturgy. If you are going to follow your inclinations on one, you are going to do it for the other - and nota bene, if those inclinations happen to include lace and birettas, that doesn't make you a traditionalist.

From a sociological, as well as a theological point of view, radical changes to the liturgy were bound to shake people up. Catholics identified with the liturgy. Again and again we hear people saying: if the liturgy can change, why not teaching? On one level this is a silly inference, but on another they had grasped something about the importance of the liturgy which the liturgists had missed. If the liturgy can be made man-centred, then the old restrictions on birth-control just don't fit in any more.


As to how to go about a restoration, we need a catechesis which gives the whole Faith to our children, and a liturgy which presents the whole Faith to everyone. Traditionalists have never questioned the need for the first of the two. We just don't want to go into battle with error with one hand tied behind our backs.
Posted by Joseph Shaw at 10:00 am