The Walsingham Pilgrimage has again put me behind with Loftus' outpourings, this one is from 25th August (Catholic Times). He is still talking about what Pope Francis said on the aeroplane. What the Holy Father said, Mgr tells us, is 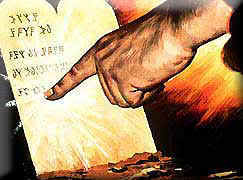 in direct contradiction to fundamentalist legislism which enshrines values immutably, as though in tablets of stone.

So, who did that, writing laws on tablets of stone? Er, God. Loftus is calling God a practitioner of 'fundamentalist legalism'.

Loftus seems to get cold feet about this and later in the article says that some things can't change - 'they go to Faith'. I wonder if he means Faith as opposed to Morals. In any case, what he really lambasts in this article is the notion of the Christian society. Referring to Rahner, he writes:

Pure and unadulterated Christianity is not meant to be protected by taboos, or by some sacral aura, from all opposition or criticism. Christianity is no less complete without Christendom than it was with it.
But if Christianity today is not to become a fundamentalist sect, then the smaller it is, the more open it must be to the world about it. Only in this way can we preserve the 'Catholicism' or universality. And this can call for some quite dramatic changes.

While Loftus fantasises about the changes an ever-shrinking Church must make to enable it to blend in with an ever-hardening Christianophobia around it, the rest of us can reflect on the fact that the obligation to convert society to reflect the truth about morality is not only firmly fixed in the Ordinary Magisterium over many centuries, but is famously reiterated in Vatican II. While talk of 'religious liberty' might seem to point in the direction of a state and society which was neutral on controversial moral questions, and away from what Loftus quaintly calls 'taboos', Dignitatis Humanae, the Council's 'Declaration on Religious Liberty', goes to the trouble of explicitly excluding any such conclusion. Thus, DG 7:

Furthermore, society has the right to defend itself against possible abuses committed on the pretext of freedom of religion. It is the special duty of government to provide this protection. However, government is not to act in an arbitrary fashion or in an unfair spirit of partisanship. Its action is to be controlled by juridical norms which are in conformity with the objective moral order. These norms arise out of the need for the effective safeguard of the rights of all citizens and for the peaceful settlement of conflicts of rights, also out of the need for an adequate care of genuine public peace, which comes about when men live together in good order and in true justice, and finally out of the need for a proper guardianship of public morality.

When wondering what the 'guardianship of public morality' means we must keep in mind that when this document was promulgated, in 1965, divorce, abortion, homosexual acts and contraception were prohibited or strictly limited in a great many jurisdictions, not just in South America and Africa but in Europe and North America. We could argue about what DG means for the public manifestation of the Christian revelation (look at the prefatory note and the earlier magisterium on that), but that's public morality for you. You can't escape Natural Law by talking about changes in social conditions any more than about religious liberty. If Rahner disagrees, so much the worse for him.