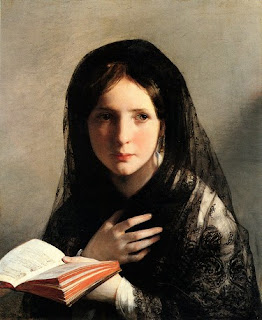 It is of course a tradition endorsed in the strongest terms by St Paul: I Cor 11.5

'But every woman praying or prophesying with her head not covered, disgraceth her head'

It is common to say that St Paul was simply reflecting the social mores of his day, but he has an elaborate theological rationale for his position, while those rejecting it appear ... simply to be reflecting the social mores of their day. Or else are reacting to some kind of childhood trauma - some older women start jabbering about officious nuns putting hankies on their heads if they went to church without a mantilla, as if they were recalling an episode of water-boarding from Guantanamo Bay. There was a remarkable example in Fr Ray Blake's combox the other week, there is a reference to Kleenex being put on girls' heads, but the position is backed up as follows:

As for Paul, yes, what he wrote about a lot of things is "inspired" but sorry, his "opinions" on social conditions of the day and social norms as he wanted them to be are NOT "gospel." They are HIS OPINIONS - he even says so himself. I find his "reasoning" on a lot of these things are lacking in logic and reason. Frankly, I don't know that the men of the day liked him either -- starting with the two disciples he told to go get circumcised to go preach. Like he couldn't find any former Jewish men to do that, or do it himself? They should have told him to go take a hike. I don't have to kiss his patootie regards his opinions on the social structure 2000 years ago. And I refuse to do so.
Well, St Paul wasn't just 'inspired', the writings of Scripture are literally inspired, they have a Divine author who doesn't make mistakes. And on the subject of head coverings St Paul does not say it is his own opinion; on the contrary,

If any one is disposed to be contentious, we recognize no other practice, nor do the churches of God. (1 Cor 11.16)

I've no reason to doubt the existence of wicked nuns, as well as good ones, and other officious women in the decades before I was born, and the damage they did in their day, but future generations can't be expected to have their lives and devotions determined by them one way or another. Young Catholic ladies are rediscovering the mantilla; the traumatised older generation are going to have to grin and bear it.
Posted by Joseph Shaw at 10:00 am