Is the EF dangerous to souls? 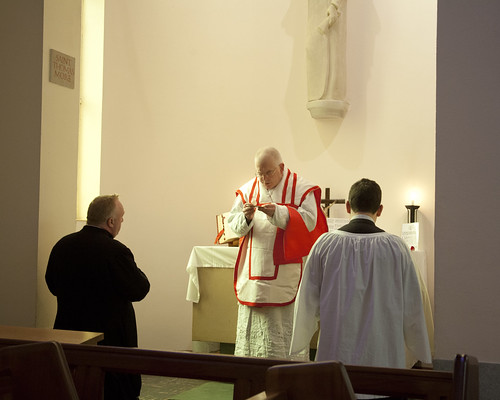 A number of people have commented on the Fisher More College situation, saying that the Bishop's banning of the Traditional Mass on campus is a response to various Bad Things happening in the college. Exactly the same thing has been said about the Franciscan Friars of the Immaculate.

The people who say this often add that banning the EF seems an odd way to address the problems, and I agree. But while I don't know if the claims about the motivations involved in either case are true, I would like to address the idea that frequent attendance at the Traditional Mass can be a danger to your soul. This argument was often hinted at before Summorum Pontificum, and if it is making a comeback that is a little worrying.

A brief autobiographical note. As I've mentioned before, for a number of years I attended the Novus Ordo in Latin. I bought myself a little booklet with the Latin and the English side by side. After a while I noticed something rather strange. Here is the booklet I used to use, open at the bit in Eucharistic Prayer I (the Roman Canon) immediately after the Eucharistic Acclamation. The Latin is on the left, the English, the official 1974 ICEL translation, on the right. 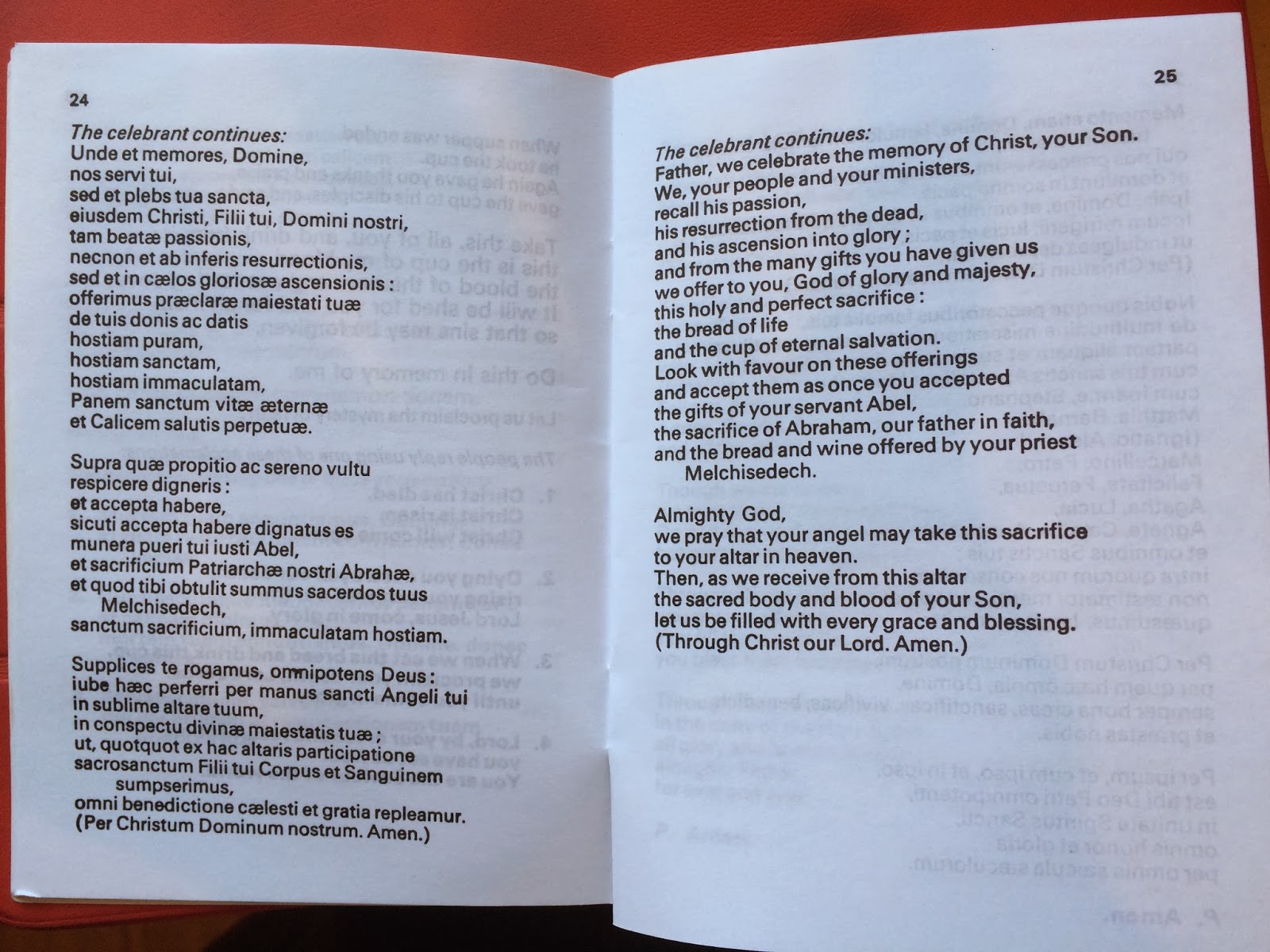 The weird thing is that the Latin text is a lot longer than the English translation. It is exaggerated by the fact that the Latin is divided into more paragraphs than the English, and uses shorter lines, but closer examination reveals that a large number of words and indeed whole phrases were not being translated.

Now this is the scandal of the 'old ICEL' translation which has now been addressed by the new translation. At what cost of effort and conflict, we all know, and we must be grateful to Bl John Paul II and Pope Benedict XVI for persisting with it. Because what 'old ICEL' said was this: there had been a concerted effort, accepted if not instigated by the very highest authority in the Church - let's not say, 'conspiracy' - to present a systematically one-sided - let's not say, 'falsified' - version of the Church's liturgical tradition. If you get into this, if you start reading about it, you realise it neither began nor ended with ICEL. And I don't mean reading books written by tin-foil hatted trads; the strongest dosage of conspiracy theory-stuff can often be found in the books of triumphalist liberals.

Once you become aware of all this, one can become a bit distracted while attending the Novus Ordo, by being reminded of all the things which are missing, added, or changed, for highly controversial reasons, and also by liturgical abuses. (At one point I started counting liturgical abuses at the Masses I attended. Not a good was to participate in the Holy Sacrifice.) Furthermore, every celebration of the Novus Ordo, one realises, can be read in terms of the views and preferences of the celebrant, and the battles he may have had with members of the congregation. Bidding Prayers are often the scene of conflicts, and what they are like can tell you a lot about the parish. The use of Extraordinary Ministers, and exactly what they do, is also fascinating, in a deeply unhelpful way. (Do they receive Communion at the same time as the Priest? Do they cleanse the Sacred Vessels? Do they put things in and out of the Tabernacle? Do they genuflect?) 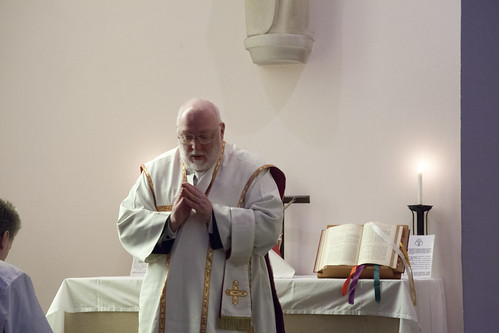 In this frame of mind, it can be a huge relief to go to the Old Mass, the Vetus Ordo. It can feel as if, for the first time for a long while, one is able to stop worrying about the political meaning of every detail, and just pray. What happens in Mass is, essentially, what the Church has done for centuries. It happens simply because the Church has done it for centuries. I don't mean it has no meaning, I just mean that the priest hasn't decided that because of his personal views this meaning is good and let's do it today. He is doing it in accordance with Tradition. Those attending can stop campaigning for more Latin, for fewer Marxist bidding prayers, or to stop the Extraordinary Ministers wearing skirts which make genuflection either impossible or indecent. They can just participate in Mass and develop their spiritual lives.

We used to hear a lot about our desire for the Traditional Mass being a 'personal preference', with the implication that this was a bad thing. I can't help being amused by this. Have those who use this phrase not noticed the role of personal preferences in celebrations of the Ordinary Form?

I am by no means saying that everyone who attends the Traditional Mass has gone through this mental process. I do think, however, that the ones which people - perhaps including Bishop Olsen of Fort Worth, Texas, or Fr Volpi, the Commissioner of the Franciscans of the Immaculate - are most worried about, may well have. The ones who those people worry might end up with the SSPX or as sede vacantists; the ones who get a bit worked up about these things.

What I want to say is this: those people, the ones who get worked up, are not going to be helped by being deprived of the the Vetus Ordo  and forced to go to the Novus Ordo. If they are really worked up, it is more likely to drive them even more nuts. For them, Pope Benedict's liberalisation of the Extraordinary Form was truly pastoral: it made it possible for them to remain in the Church in a serene fashion, and to make spiritual progress. To calm down, in fact.

Attending the Traditional Mass may make people realise that the Mass has changed rather radically, and this may start the train of thought I described above. But any contact with reality can do that: looking at the religious art in an art gallery, reading about the history of the Church, looking at old church buildings. You can't hope that people will never realise that the Mass used to be said in Latin and ad orientem. What you can do is to make the point, as Pope Benedict did, that however much has changed, the Church has not repudiated the past. What was sacred in the past is sacred now; what was doctrine in the past is still doctrine now. This relieves us of the necessity of double-think, which actually drives you mad after a while.

Suppose the wretched Franciscans of the Immaculate are as bad as their critics claim; suppose the wretched Michael King, President of Fisher More College, is as bad as his critics claim. For heaven's sake don't deprive them of this spiritual solace, of the Traditional Mass. It is cruel, it is unjust, and it will make whatever theological or political problems there may be much, much worse. 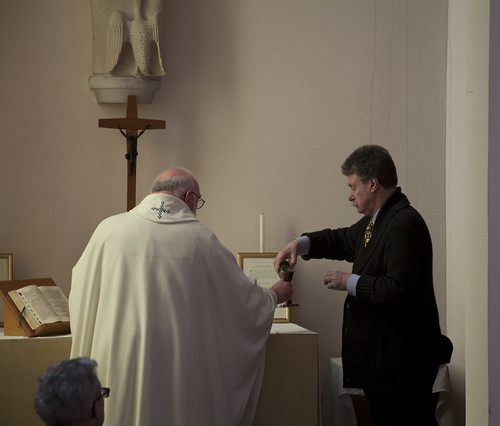 Photos of Low Masses celebrated during the LMS Priest Training Conference in Leicester in 2013.
Posted by Joseph Shaw at 11:26 am