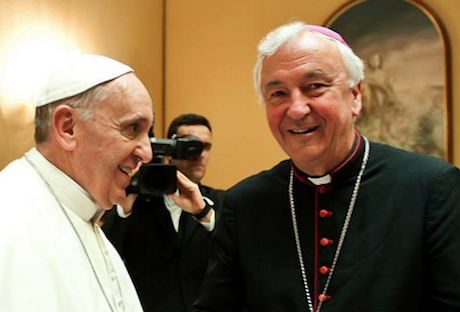 A while ago Mgr Basil Loftus attacked Archbishop Nichols, as he then was, for appealing for money (for a charitable group dedicated to this specific cause) to repair the fabric of Archbishop's House in Westminster. This weekend, he goes after him, this time by name, for defending the Church's discipline on Communion for those divorced and remarried.


'Matters have not been helped by Cardinal Vincent Nichols' recent comment that when he was a youth there was a more reserved attitude to the Eucharist. Indeed there was. But it cannot be relied upon to support in any way the exclusion of the divorced and remarried from Holy Communion. John Paul II roundly condemned it as "not so much a feeling as unworthiness as a certain ... lack of hunger and thirst, which is also a sign of of lack of adequate sensitivity towards the great Sacrament of love and a lack of understanding of its nature". (Dominicae Caenae, III, xi)

'Such purely juridicial considerations of marriage totally ignore its continuity, a continuity which is indestructibly preserved until death, in the partners' love for their children and grandchildren, and indeed for one another, and in the continuing psychological and spiritual memory, or more accurately 'memorial', of their conjugal union. Not only is the question of Holy Communion for the divorced and remarried a positive consideration in its own right - it also helps to focus minds on the often negative and harmful purported 'solution' of marriage nullity.'

On the second quoted paragraph, Loftus' position, as far as it is possible to discern what it is, beggars belief. He thinks that Catholics should not seek annulments for (presumably, null) failed marriages, but are better off living in concubinage: a formalised adultery. This state, he goes on to say (referring to Cardinal Kasper's talk) should be 'tolerated' but not 'accepted': there is no question of remarriage in Church, or, presumably, sacramental absolution, but the parties should go to Communion in order to make their descent into Hell more secure... or something.

He claims that this was the practice of St Basil: that after 6 months penance an adulterer would be given Communion again. That I can believe: but not that St Basil said that during and after this penance the adulterer should carry on committing adultery, because it had become (as Loftus suggests) psychologically impossible for the 'penitent' to stop. I should like to have been around had this argument ever been put to the great saint. The first paragraph represents what I think must rank as one of the top handful of manifestly dishonest things Loftus has written: and there is a very strong field. It goes beyond being grossly misleading, and actually involves a lie. This can easily be shown by giving a longer quotation from Bl Pope John Paul II, Domicae Cenae 11:

Moreover our Catholic communities certainly do not lack people who could participate in Eucharistic Communion and do not, even though they have no serious sin on their conscience as an obstacle. To tell the truth, this attitude, which in some people is linked with an exaggerated severity, has changed in the present century, though it is still to be found here and there. In fact what one finds most often is not so much a feeling of unworthiness as a certain lack of interior willingness, if one may use this expression, a lack of Eucharistic "hunger" and "thirst," which is also a sign of lack of adequate sensitivity towards the great sacrament of love and a lack of understanding of its nature.

However, we also find in recent years another phenomenon. Sometimes, indeed quite frequently, everybody participating in the eucharistic assembly goes to Communion; and on some such occasions, as experienced pastors confirm, there has not been due care to approach the sacrament of Penance so as to purify one's conscience. This can of course mean that those approaching the Lord's table find nothing on their conscience, according to the objective law of God, to keep them from this sublime and joyful act of being sacramentally united with Christ. But there can also be, at least at times, another idea behind this: the the life of our communities to lose the good quality of sensitiveness of Christian conscience, guided solely by respect for Christ, who, when He is received in the Eucharist, should find in the heart of each of us a worthy abode. This question is closely linked not only with the practice of the sacrament of Penance but also with a correct sense of responsibility for the whole deposit of moral teaching and for the precise distinction between good and evil, a distinction which then becomes for each person sharing in the Eucharist the basis for a correct judgment of self to be made in the depths of the personal conscience. St. Paul's words, "Let a man examine himself,"(64) are well known; this judgment is an indispensable condition for a personal decision whether to approach Eucharistic Communion or to abstain.


The lie is that Loftus claims that Pope John Paul was talking about the old attitude, connected with what Cardinal Nichols remembers from his youth, ie 40 or so years ago, when he says 'a lack of Eucharistic "hunger" and "thirst," which is also a sign of lack of adequate sensitivity towards the great sacrament of love and a lack of understanding of its nature'. He isn't: having just mentioned in passing the older attitude, which was connected with an 'exaggerated severity', he is now talking about an attitude which is seen in the post-Conciliar era, something he was aware of as current at the time of writing (the document dates from 1980).

What is grossly misleading is to omit to mention that, although Pope John Paul wants to oppose the spiritual ennui which replaces the hunger and thirst for the Eucharist which is the healthy attitude, he immediately goes on, at greater length, to condemn the opposite and more widespread problem, of people going up to Communion regardless of their spiritual state. Quite clearly John Paul II, exactly like Cardinal Nichols, can see that something good has been lost from the past when people took the reception of Communion more seriously, even if in the past this was sometimes 'exaggerated'. Now we have gone to the opposite, and much more dangerous, extreme. It is no longer a matter of missing out on spiritual opportunities, but of plunging more deeply into grave sin.

Loftus' complete lack of intellectual integrity is a warning to everyone reading about this debate. The liberals' attempt to force open the Church's discipline on marriage and communion has an air of desperation. They are not interested in a thoughtful discussion, but at forcing this through, and they will stop at nothing to do so. Loftus article suggests why this might be: 'the average age of bishops and theologians who campaign on their [remarried divorcees] behalf is increasing. Men like Ladislaus Orsy who have done so much to keep this issue alive are now in their 90s. Even octogenarians such as Walter Kasper will "be cut off, and fly away" before many of today's younger people are fully fledged. So, yes, the need for young blood in the theological fight for mercy is urgent.'

Yes, Mgr: the clock is ticking, and time is not on your side.

Photos: the younger generation receiving Communion at the St Catherine's Trust Summer School. I don't think they will be flocking to Loftus banner any time soon.
Posted by Joseph Shaw at 3:56 pm