The Church, the Jews, and the Piranha tank 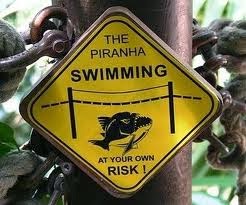 I am pleased to see that the lay theologian Dr John Lamont has published an article on the Jews and the Church: 'Why the Jews are not the Enemies of the Church' in the Homiletic and Pastoral Review.


Dr Lamont is extremely sympathetic to the Traditional Catholic cause, and this is by no means an attack on that. It is a corrective, however, to claims made by some attached to the Traditional Mass, and specifically to some remarks of Bishop Fellay, Superior of the Society of St Pius X. I do not regard the SSPX, as an organisation, as anti-Semitic either in theory or practice: anyone who has been paying attention will have noticed that the SSPX has the habit of ejecting members who have clearly anti-Semitic views. What is evident, however, is that there is a current of conspiracy-theory thinking which can be found in Traditional Catholic circles which can easily lend itself to anti-Semitism.

Dr Lamont's article on the Homiletic and Pastoral Review website is already generating the kinds of comments which give Traditional Catholics a bad name: anyone addressing these matters on the internet steps into a tank of piranhas. These commenters - perhaps they will make an appearance on this blog as well - are not representative of the Traditional Catholic movement. Since they are attracting the attention of many who are open-minded about or hostile to the Traditional Catholic cause, I believe that it has become dangerous simply to ignore them. It is time the rest of us made it clear that we do not agree with them, and why.

The same task falls to those on both the political left and right in the UK, the fringes (and not just the fringes) of whose movements attract their own versions of the unpleasant views which can be found on the fringes of Traditional Catholicism.

I also think it is important to set out the reasoned case, from a perspective friendly to Traditional Catholicism, against the key claims of the conspiracy-theory types, since this case involves historical facts which are not all widely known even by those not at all attracted by the conspiracy theories.

Here are some extracts (in red) of, and paraphrasing summaries from, the article.

The reason why Rabbinic Jews are not enemies of the Church can be put briefly. Such Jews do not seek to convert Christians to Judaism, or to prevent non-Jewish Christians from exercising their faith. They only refuse to become Christians themselves, which does not suffice to make them “enemies” of the Church.

Rabbinic Judaism is something which, properly speaking, arose only after the destruction of the Temple in 70 AD. Furthermore, as a result of the massive pogroms against Jews carried out by the Romans in the wake of the various Jewish Revolts, Rabbinic Judaism derives overwhelmingly from Jewish sources outside the Roman Empire, notably in Babylon. The Jewish antecedents of Rabbinic Judaism who lived in the time of Our Lord, therefore, were many hundreds of miles away from Jerusalem when He was crucified.

The statements of St. Peter condemn those Jews who were themselves personally involved and responsible for the death of Christ in bringing about his crucifixion. The term “adversary,” that is used by St. Paul, is applied to the Jews who sought to prevent the first Christians from preaching the Gospel to the Gentiles. It is this attempt to prevent the preaching of the Gospel that constitutes the Jews as “enemies” of all men in St. Paul’s eyes since they are trying to prevent the message of salvation from reaching the rest of the human race. Since Rabbinic Jews make no effort to prevent the preaching of the Gospel to Gentiles, and the founders of Rabbinic Judaism lived some time after the death of Christ, these condemnations cannot be applied to them.


When the Talmud was burnt in Paris at the instigation of [the Jewish convert to Catholicism] Nicholas Donin, French Jews appealed to the Pope, who judged that it could be permitted, if it was expurgated of any anti-Christian remarks. A similar judgement was made by the Council of Trent. A commission of Jews approached the Council to request that it rule that the Talmud could be printed. The Council passed their request on to the Congregation for the Index, which again ruled that it could be printed if any anti-Christian statements were removed. This evaluation of the Talmud was more positive than that given to the works of Luther, Calvin, Peter Abelard’s Introduction to Theology, and Samuel Richardson’s Pamela – all of which were banned in their entirety by the Church.
---------------
“Because Rabbinic Jews deny the doctrine of the Trinity, they do not believe in the same God as the Christians.”  The claim makes the mistake of inferring the psychological state of the believer from the logical consequence of his beliefs. It is true that since God is necessarily a trinity of persons, it necessarily follows that any being that is not a trinity of persons is not God. However, it is not true that every believer accepts all the logical consequences of his beliefs, simply because they do not always draw these logical consequences; and, indeed, are not capable of drawing all of them, since these consequences will be infinite in number. In the particular case of inferring that no being who is not a trinity of persons is the true God, it is only Christians who are capable of making this inference; the belief that God is necessarily a trinity of persons is needed to make it, and this belief can only be acquired through an act of Christian faith. Thus, from the facts that the Jews reject the doctrine of the Trinity, and that the denial of this doctrine entails that the true God does not exist, we cannot conclude that Jews do not believe in the existence of the true God.
-------------------
However, the Jewish organizations who insist that the Church should accept that the Mosaic law is still valid for Jews, are not representative of Jews as a whole. Most religious Jews are realistic enough to understand that the Church is not going to change her fundamental teachings, and are content with a vigorous rejection of anti-Semitic hatred and discrimination by Catholics. In defence of these Jewish organizations, it should be said that they are not necessarily well-informed about Christian thought, and that they have been assured, by some individuals with high positions in the Church, that Catholics no longer consider that they need to be saved by belief in Christ. They naturally take these assurances to correspond to what Catholic teachings now assert. When they are told that this is not, in fact, the case, they consider this to be an attempt to cheat them by going back on prior agreements. Some apologies are owed to them for having been given false assurances. The ecclesiastics who gave these assurances sought to use Catholic-Jewish relations as a pretext and disguise for advancing their own theological agenda, which was one of modernist promotion of all religions as good, and as paths to salvation. The Jews who accepted these assurances got caught up in an internal game of subversion of the Church, which was not their objective.
Full article here.
Posted by Joseph Shaw at 12:11 pm