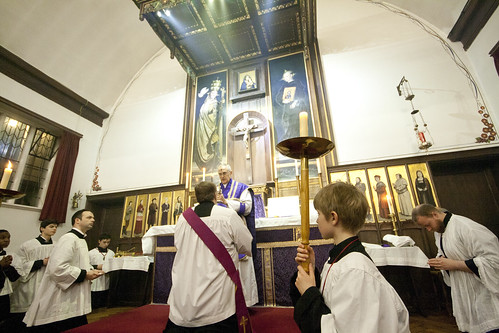 Pope Francis made some interesting remarks at a recent meeting of priests in Rome. There's a fuller report on Rorate Caeli here; I want to focus on just one aspect of what he said. What follows is paraphrase with snatches of direct quotation. (The scattered remarks are reported by participants of the meeting; we don't have a full text.)

Through the Motu Propio Summorum Pontificum, published in 2007, the now Pope Emeritus allowed the possibility of celebrating the Mass according the liturgical books edited by John XXIII in 1962, notwithstanding that the "ordinary" form of celebration in the Catholic Church would always remain that established by Paul VI in 1970.

Pope Francis explained that this gesture by his predecessor, "a man of communion", was meant to offer "a courageous hand to Lefebvrians and traditionalists", as well as to those who wished to celebrate the Mass according to the ancient rites. The so-called "Tridentine" Mass – the Pope said – is an "extraordinary form of the Roman Rite", one that was approved following the Second Vatican Council. Thus, it is not deemed a distinct rite, but rather a "different form of the same right". (sic)

However, the Pope noted that there are priests and bishops who speak of a "reform of the reform." Some of them are "saints" and speak "in good faith." But this "is mistaken", the Holy Father said.

It would be interesting to know exactly why the Pope thinks the RotR is 'mistaken', and also exactly what he understands by the term. Since he is talking about the way that particular priests choose to celebrate Mass, he can't be talking about proposals to change liturgical law (such as to allow a silent Canon, for example), so much as the choice of options and a general liturgical style.

A lot of ink has been spilt on how the Ordinary Form can or should be celebrated 'in continuity' with the previous liturgical tradition, and many treatments of the subject have gone out of their way to criticise and reject the Extraordinary Form as an alternative approach. Examples are Fr Jonathan Robinson The Mass and Modernity, László Dobsay's The Restoration and Organic Development of the Roman Rite, and in general the work of Fr Joseph Fessio and Ignatius Press. Even writers like Fr Michael Uwe Lang and Fr Aidan Nichols OP have over the years written that radical changes to the Traditional Mass in the direction of the Novus Ordo would be beneficial, or at least defensible; a wider use of the vernacular being an example. (Obviously, such arguments are made on the basis that the changes proposed aren't all that radical, but we can disagree.) Most of these discussions date from before Summorum Pontificum, when the idea that the Traditional Mass was a sort of forbidden fruit which no one could be seen to want had an insidious influence on the whole debate, and sometimes a very conscious influence on editors of books they hoped would be 'mainstream'.

Things have already moved on since then, and remarks like this from the Pope are going to move things on a lot more.

The situation we have today is that the Traditional Mass, the Vetus Ordo or whatever we want to call it, is officially acceptable. It is here to stay. It is a minority interest, and will continue to be a minority interest for the foreseeable future, but it is not regarded as a problem, any more than celebrations of the Byzantine Rite or, come to that, the puzzling liturgies of the Neo Catechumenate, are, to the official mind, a problem.

The efforts of the RotR crowd, on the other, can easily be a problem from an official point of view. This has, in fact, always been the case: many bishops and seminary rectors have made it abundantly clear over the decades that things like the use of Latin, the exclusion of female altar servers, and celebration ad orientem, are officially discouraged. The argument that they are all legitimate options within the reformed Missal looks good on paper but cut little ice in practice. Bl Pope Paul VI made it clear in 1969 that, regardless of what liturgical law or indeed Vatican II said, the New Mass was not going to be characterised by the use of Latin and Gregorian Chant:

No longer Latin, but the spoken language will be the principal language of the Mass. ... We will lose a great part of that stupendous and incomparable artistic and spiritual thing, the Gregorian chant.

When he later attempts to derive some comfort for Latin-lovers from the idea 'the Latin language will not disappear', he is talking about the non-liturgical uses of the language. 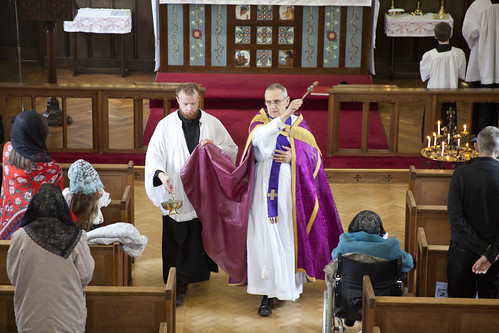 The Reform of the Reform was at odds with what bishops and seminary rectors thought of as the 'orientation' demanded by the Second Vatican Council and the Reform: the 'Spirit of the Council'. It is easy to mock this concept, but if you plough through enough official documents it is in fact possible to discern, among the apparently mutually contradictory texts, what we might call an official (not infallible) interpretation of the Council and the Reform which, while it certainly doesn't justify free-wheeling liturgical abuses, is not friendly to the RotR either. Pope Paul's address quoted above is one illustration; also enlightening is the General Instruction on the subject of candles on the Altar (§307), or  use of the vernacular (§13). It is presumably to this 'orientation' that Pope Francis is recalling priests attracted by the RotR.

Why might using the available liturgical options contrary to the Conciliar 'orientation' cause a problem for the Church, according to the Holy Father or anyone else? I can't speak for Pope Francis, but there are a couple of obvious reasons.

First, it is divisive. Today the liturgy in general is a source of division in parishes and religious communities, but it is a fact that a priest who tries to push the Ordinary Form in the direction of the Reform of the Reform can expect a lot of opposition: even more division than usual. It is kicking the hornet's nest. In many circumstances it would cause less upset, and more easily-dealt-with upset, for a priest to introduce a Vetus Ordo Mass at a new time slot than, say, to start celebrating an existing OF Mass in Latin and ad orientem.

Secondly, the Novus Ordo celebrated with lots of traditional bells and whistles doesn't work as intended. Many Catholics, fed up with liturgical abuses and a lack of reverence, flock to 'nicely done' Novus Ordo celebrations, but they aren't what the reformers wanted, and they present a number of difficulties, both in how the liturgy works and in how the congregation participates. I've discussed this before here. Everyone accepts that there is a problem using the Church's patrimony of sacred music at the Novus Ordo, because the periods of silent prayer by the priest, for which this music was, in part, composed, no longer exist. I have also pointed out before that using options like the Roman Canon, in full, at the Novus Ordo is problematic because the text was never intended to be declaimed aloud, and it is too long and complicated. 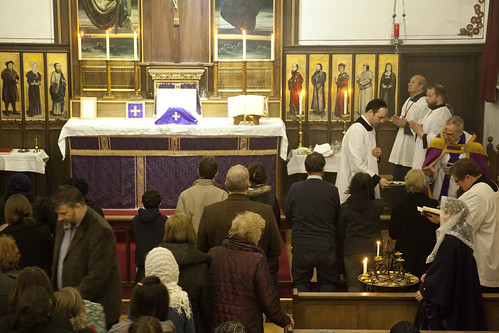 As for participation, you can't plunge the congregation into a contemplative mode of participation, and then ask them to jump up and shake hands, and give a hearty 'Eucharistic acclamation'. What actually happens can easily be a case of falling between two stools.

I am not an apologist for the Ordinary Form - I can safely leave that task to the better qualified - but I can see what its creators were trying to do. What I want to say, and what the FIUV Position Papers have often argued, is that you don't get the perfect liturgy by taking the Extraordinary Form and mixing in elements of Bugnini. The flip side of that position is that we can't turbo-charge the Ordinary Form by simply mixing in elements of the EF. The EF has its own mode of participation, its own structure, its own genius; a compromise just creates a mess.

And not the kind of 'mess', it would appear, that the Holy Father wants us to create in our parishes. 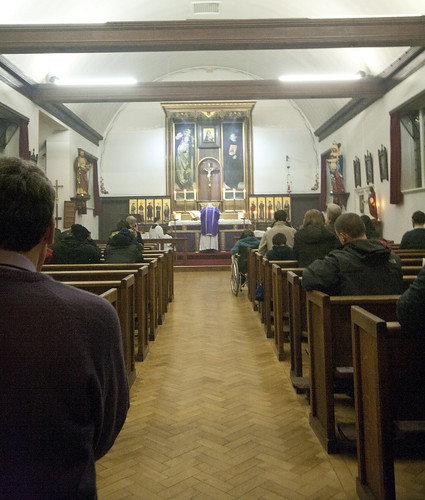 Photos from Ash Wednesday, and Asperges from the previous Sunday, at SS Gregory & Augustine's in Oxford, celebrated by Fr John Saward: more here.

Support the work of the LMS by becoming an 'Anniversary Supporter'.
Posted by Joseph Shaw at 5:07 pm