Doubts about Alice von Hildebrand on the sacredness of women

Regular readers will know that I am just as happy criticising allies as criticising opponents; I think people who are 'on the side of the angels', and those influenced by them, are just as much in need of having their ideas refined in the furnace of reasoned discussion as those who are completely wrong-headed. So in this spirit I wanted to say something about Alice von Hildebrand, who is having an influence, in particular, on discussions of head-coverings for women in church, as I promised when I posted a video about mantillas in which her views (though not her name) are mentioned.

Not long ago I read her short book Man and Woman: A Divine Invention, where these topics are discussed. She is in favour - as am I - of head coverings for ladies in church, and she appears to give a theoretical basis for the practice which bypasses the embarrassing (to many) stuff in St Paul about women being 'under authority', which he tells us is a central symbolic meaning of the veil (1 Cor. 11:10).

This may seem convenient, but in fact it is problematic, since she is constructing a theology of the complementarity of the sexes and St Paul's treatment is the treatment of complementarity in sacred Scripture. Furthermore, she provides her readers with no resources to deal with St Paul's difficult passages. Instead, bypassing the issue of authority, she wants to talk about superiority, and tells her readers that women are superior to men ('this superiority is mostly a moral one', p73).

The key argument (expressed at greater length in her The Privilege of Being a Woman) is that women's bodies are 'touched' and thus 'made holy' by God when he infuses a soul into the fertilised egg. I have to say I find this a completely unconvincing idea, and actually rather distasteful: people don't become holy by virtue of their biological functions, however important and honourable those functions may be. It doesn't seem to derive from anything in St Paul or the wider Tradition. One peculiar implication would seem to be that mothers are more sacred than virgins.

It is perfectly true, and in St Paul, that we veil what is sacred, and that head coverings are connected with this. But that is not because of what women are, but what women represent: namely, the Church. In this way we can understand the idea of the woman's head 'having authority over it' because she represents the Church which is under the authority of Christ; the man's head does not have this 'authority' over it because he represents Christ, to whom he is himself subject as a member of the Church.

It is this sense that husbands must love their wives (or their families) as their own bodies, sacrifice themselves (as necessary) for them, and take up responsibility for them. To vary the comparison here, you can't separate the idea of the Shepherd who lays down his life for his sheep from the idea of the Shepherd who leads the sheep. The leader who does not protect is a tyrant; the protector who does not lead is a mercenary.

I think it is fascinating that in discussing the role of men as the head of the household, Plato and the Islamic tradition both explain it in terms of the inferiority of women. Plato thought that women (and slaves and children) were deficient in reason. Islamic sources say that women are morally deficient as well, and overrepresented among the damned. This kind of argument has got nothing to do with St Paul's reasoning, and an authentic Catholic view. The specialisation of roles, whether in the family or in the Church as whole, does not imply inferiority of either sex compared with the other, but simply a specialisation of roles. Someone has to be in authority over a community; it doesn't imply an intellectual or moral deficiency on the part of the community's other members. Saying women are morally superior to men, just as much as the other way round, implies something very unsatisfactory about the created order of things. Did God create one of the sexes as fodder for Hell?

It is in this context that Catholic societies developed a happy toleration of women being independent and, indeed, exercising authority when things happen to fall out that way. Medieval and early modern Catholic Europe had reigning Queens and important noble women, business women, important female mystics and abbesses, and female artists. It wasn't the rule, but it wasn't against the rules either. The principle of male headship articulated by St Paul didn't prevent a widow like Chaucer's Cressida or an heiress like Shakespeare's Olivia having complete self-determination, a situation which would never be allowed in ancient Rome or Greece, any more than in traditional Islamic societies.

Or else the lady's mad; yet, if 'twere so,She could not sway her house, command her followers,Take and give back affairs and their dispatchWith such a smooth, discreet and stable bearingAs I perceive she does...


Alice von Hildebrand goes on, in her book, to explain that we can see women are more pious because there are more of them in church, 'especially in Latin countries'. She can hardly be ignorant of the reason: in Latin culture, piety is regarded as effeminate. Does she think this is a good thing? Since it is not a cultural universal, should we not rather work to ensure that boys and men are not put off religion by a completely accidental and indeed false appearance of sissy-ness? If only for the sake of Catholic women, who want to marry good Catholic men.

There is more detail on the head coverings issue in the FIUV Position Paper. 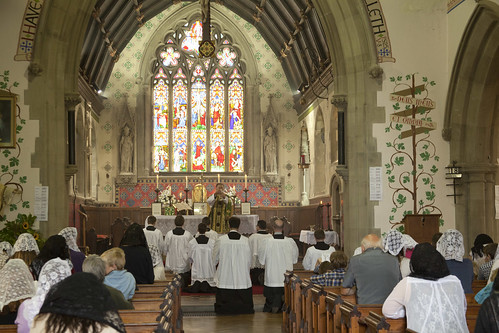