UKIP in Scotland has been accused, by Dr Jonathan Stanley, a former party official, of trying to hoover up sectarian votes by indulging in anti-Catholic rhetoric, The Scottish Catholic Observer & The Tablet report. They refer to tweets by Caroline Santos, a candidate for the Holyrood elections which take place in May, for the South of Scotland.

I thought I'd have a look myself. Ms Santos has not deleted her tweets, which is interesting in itself, and I can't say I like the look what she says. I should add, of course, that UKIP is not the only party with activists, and even candidates for elected office, with dubious views. I'm interested in this because the target is the Catholic Faith. 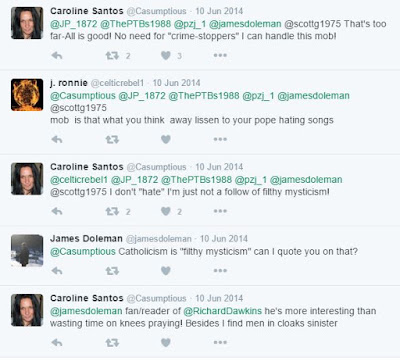