New study on the Lectionary: old and new 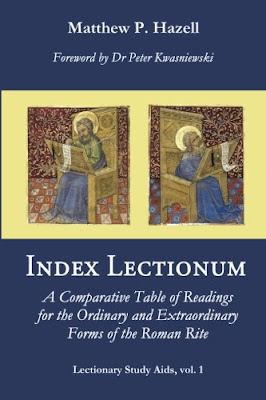 Mathew Hazell's Index Lectionem is a comprehensive comparison of the old and new Lectionaries. It is not exactly bedtime reading - it is a huge table. But the contents are fascinating. Buy it here.

Peter Kwasniewski notes in the Introduction:

John 19:25–27: 'Now there stood by the cross of Jesus, his mother, and his mother’s sister, Mary of Cleophas, and Mary Magdalen. When Jesus therefore had seen his mother and the disciple standing whom he loved, he saith to his mother: Woman, behold thy son. After that, he saith to the disciple: Behold thy mother. And from that hour, the disciple took her to his own.'

In the older form of the Mass, this Gospel is read each year for the Seven Sorrows of the BVM (September 15), the Commemoration of the Seven Sorrows of the BVM (Friday after Passion Sunday), the Immaculate Heart of the BVM (August 22), the Common of Our Lady on Saturdays (fourth formulary), and feasts celebrated in particular places, e.g., Our Lady, Mediatrix of All Graces (May 8). A Catholic frequenting the usus antiquior would hear this Gospel several times a year. At an Ordinary Form Mass, he is likely, at best, to hear these verses only once, in passing, on Good Friday, since all other uses of it are optional and buried among numerous options


No doubt for different reasons, the following two verses, 1 Corinthians 10:7-9, part of the Traditional Lectionary for the 9th Sunday After Pentecost, are totally excluded from the 1970 Lectionary.

So is this passage, of a quite different character, across Romans 12:17–21, used in the old Lectionary as part of the Epistle of the 3rd Sunday After the Epiphany:

To no man rendering evil for evil. Providing good things, not only in the sight of God, but also in the sight of all men. If it be possible, as much as is in you, have peace with all men. Revenge not yourselves, my dearly beloved; but give place unto wrath, for it is written: Revenge is mine, I will repay, saith the Lord. But if thy enemy be hungry, give him to eat; if he thirst, give him to drink. For, doing this, thou shalt heap coals of fire upon his head. Be not overcome by evil, but overcome evil by good.

Dr Kwasniewski gives more examples, and the book sets out the whole thing in detail. None of this would be surprising if the reform of the Lectionary did not have as its chief publicly stated purpose (and the only purpose given it by the Second Vatican Council), that of providing a larger selection of scriptural texts. It is indeed a larger set of texts, but they still went to amazing trouble to exclude texts they didn't like, for a variety of reasons, from use. Some are buried among scores of options given for votive Masses unlikely ever to be considered, let alone used; others are completely absent.

As Bugnini noted in his book Reform of the Liturgy, Pope Paul didn't even look at the lectionary in detail. He was too busy, so he just approved it. It represents an extraordinary and surely unprecedented imposition on the Church of the whims of a group of experts. Far from being, as is frequently asserted, an undisputable success of the Reform, the Lectionary is a real problem: and one which is only beginning to be studied.

This book will be an indispensible aid to that study.

See the Position Paper on the Lectionary here.