Why the 'Old Mass' disturbs a conformist age: in the Catholic Herald 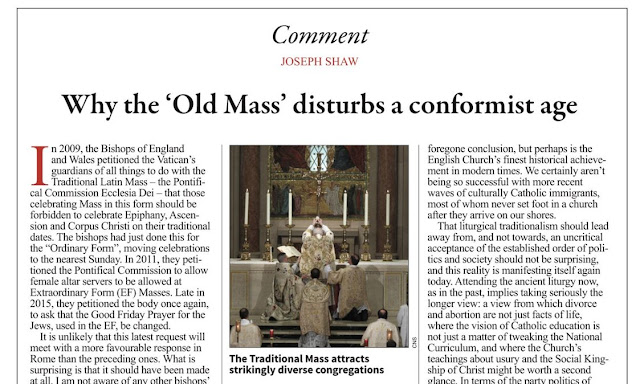 I have a feature article in this weekend's Catholic Herald. It's not online, you'll have to buy a copy to read it. Here's an extract.

That liturgical traditionalism should lead away from, and not towards, an uncritical acceptance of the established order of politics and society should not be surprising, and this reality is manifesting itself again today. Attending the ancient liturgy now, as in the past, implies taking seriously the longer view: a view from which divorce and abortion are not just facts of life, where the vision of Catholic education is not just a matter of tweaking the National Curriculum, and where the Church’s teachings about Usury and the Social Kingship of Christ might be worth a second glance. In terms of the party politics of 2016, it is a view, as Pope Francis would express it, from the periphery. It is view which takes the vulnerable, the ignored, and the exploited, more seriously than it takes the cognoscenti.

This is matched by the Traditional Mass’s ability to attract diverse congregations. At a time when too often Catholics segregate themselves into social, educational, and linguistic categories by choosing which parish and which version of the Ordinary Form they attend, a complete range of people can be found at the EF. Catholics attracted to a more counter-cultural view of the Faith, naturally see the Faith which unites them as more important than anything which divides them.

Support the work of the LMS by becoming an 'Anniversary Supporter'.
Posted by Joseph Shaw at 3:11 pm