The Prayer for the Queen in The Tablet 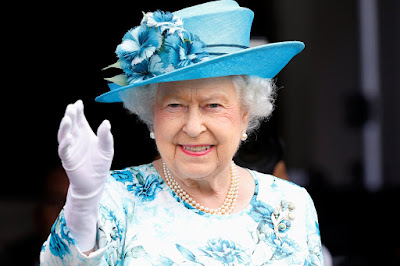 Last weekend a certain Fr David Clemens criticised the Bishops of England and Wales over their mandating a prayer for the Queen to mark he 90th Birthday in a letter to The Tablet. This weekend The Tablet published a whole sheaf of responses, including one from me. The other published letters focused on the importance of praying for the head of state; my interest was with the liturgical aspect of the question. Here is my letter.

I was amused by Fr David Clemens' description (Letters, 23rd April) of the 'Prayer for the Queen' mandated by the Bishops' Conference for Masses taking place on 11-12th June, as 'a quasi-Protestant prayer for the Queen that would not be unfamiliar to Edward or Elizabeth Tudor.'

The prayer the Bishops are asking parishes to use is a translation of the 'Domine salvum fac' ('salvam fac' for a female monarch), which originated in medieval France. It was used in the coronation of King Francis I in 1515, and in time gained a stable place at the end of the 'principal Mass on a Sunday' in countries with Catholic monarchs, but it has also been adapted to petition for the good estate of republics ('Domine salvum fac rem publicam'). It has been set to music by many Catholic composers, such as Lully, Charpentier, and Gounod.


In an interesting assertion of Catholic loyalty to the crown, it has been in use in post-Reformation England (but not Scotland) for more than two centuries, and is sung and said today at the end of Sunday Masses celebrated in the Extraordinary Form. For other Masses it stopped in 1964.
It is good to see this monument of Catholic tradition return to our parishes, if only briefly. 'Quasi-Protestant' it certainly is not.


I can only imagine that Fr Clemens thinks that the very idea of a prayer for the Sovereign is a Protestant, Erastian notion. If so, I certainly share with him some discomfort over the enormous Royal Coats of Arms seen in some Anglican churches, from the Protestant Tudors. Henry VIII and his immediate Protestant successors treated the Anglican Church at times as a sort of cult of the monarchy, removing references to unjust kings, and the saints who opposed them, from the liturgy. But it is quite another thing to object to prayers for the public good, and in a kingdom that means praying for the king, or queen.

While on the subject, it is worth noting something a little odd about the Bishops' translation of the Prayer for the Queen, which quite naturally differs a bit from the one you'll find in the Latin Mass Society's Ordinary Booklet, is that they have changed the ending of the collect. Collects have different endings depending on whether they are addressed to the Father, or the Son, and whether they address the Holy Ghost directly in the main text. The traditional prayer is addressed to the Son, since it includes the petition

'to come unto thee who art the way, the truth, and the life.'

The 1960s fashion was to want all collects to address the Father through the Son and in the Holy Ghost, and the Prayer for the Queen has had the same treatment as that meted out to a number of other collects in the 1970 Missal. The Bishops' version turns this last petition into part of the final doxology, so the whole prayer is made

through Christ who is the way, the truth and the life...

The implication of the 1960s theology is that we shouldn't pray to Jesus, or the Holy Ghost, in the liturgy at all, a rule so often broken in the Roman liturgical tradition that one feels like asking 'who sets the rules here, the Church in her liturgy or a bunch of theologians?' I don't know how many would seriously defend that rule today, and it seems curious that the Bishops have promulgated a prayer which had been changed to follow it.

For the sake of comparison, the translation in the LMS booklet is as follows.


O Lord, save Elizabeth our Queen. And mercifully hear us when we call upon thee.
P: Let us pray.
We beseech thee, almighty God, that thy servant Elizabeth our Queen, who through thy mercy has undertaken the government of this realm, may also receive an increase of all virtues. Fittingly adorned with these, may she be able to shun all evildoing, [in time of war: to vanquish her enemies,] and, together with the Prince her consort and the royal family, being in thy grace, to come unto thee who art the way, the truth, and the life. Through Christ our Lord.
R: Amen.