See me on The Big Questions 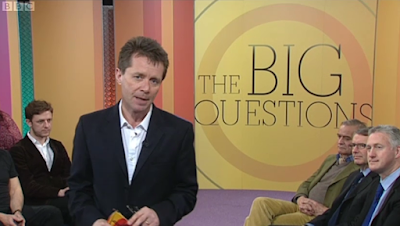 You can see me talk about two of the three topics discussed on this morning's 'The Big Questions' on BBC 1, presented by Nicky Campbell,

on IPlayer here, if you are in the UK. The topics to which I contribute start at 25 minutes in.

(Chances are it'll be on YouTube pretty soon for an international audience.)

The topics were: in light of Amoris laetitia, should women have more power in the Catholic Church? and, Does God care what you wear?

I enjoy a bit of rough and tumble in debate, and I'm used to it. Having reviewed the footage, I'm reasonably pleased that I got certain points across, and I think my contributions made for interesting TV. What does strike me, on reviewing it, was the enormous amount of time allowed to the advocate for women's ordination in the Catholic Church: it looks more like a party political broadcast than a contribution to a debate programme.

Support the work of the LMS by becoming an 'Anniversary Supporter'.
Posted by Joseph Shaw at 4:26 pm