How not to treat a lady

Over on Catholic Gentleman, Sam Guzman has re-posted a discussion of 'How to treat a lady' written by  John Cuddeback, a Philosophy prof at Christendom College. On Cuddeback's own blog it is part of a series. It doesn't say a great deal of substance, but here is its conclusion.

Women are deserving of special reverence not because of weakness, but because of strength. In women, a man can intuit the presence of something that transcends his comprehension. It is in reality something of the divine, something that is somehow his to cherish, to serve, and to protect. Just what it is, and how best to respond to it, he will need to spend a lifetime trying to discover.

I've discussed this kind of thing before, but I'll go over it again because clearly this needs repeating.


What Cuddeback is presenting is described by bloggers of the 'Manosphere' as the view of a 'White Knight' or 'trad con' (at least, those are among the more polite terms they use). They regard this kind of sentiment as indicative of an attitude of servility on the part of men, enabling and sustaining the peculiar position taken by women in today's West: a position which one might call privileged, except that it doesn't reliably contribute to their happiness. I'm not going to defend this view in this post, but Cuddeback ought to be aware that he is wandering into a minefield. In certain circles soupy stuff about girls being made of sugar and spice and all things nice still seems pleasant old-fashioned gallantry, and emphasising it may appear to be an obvious way to get men to behave better. In other circles it can get you burnt at the stake. If Cuddeback realises this, he gives no indication of it.

The Manosphere arguments should at least be addressed. I've posted about the 'man crisis' a few times. The idea that men are indelibly privileged, and need to be taken down a peg or two, looks a lot less convincing from the wrong side of a University degree or a divorce court. What I want to point out here, however, is how un-Catholic Cuddeback's position is.

It should be obvious that the notion that women are superior to men in some moral or spiritual sense, that they have more of the 'divine' in them, is theologically insane, and finds no place in Scripture, the Fathers and Doctors, or the Magisterium. All these sources, in fact, are refreshingly candid about women's faults, just as they are about men's. Cuddeback's effusion has no connection with the Catholic tradition, but it isn't difficult to identify its source: it is the Romantic movement of the 19th century. It is this movement, reacting against the exaggerated rationalism of the Enlightenment, which created the angelic feminine ideal, against which Feminism reacted in turn.

Feminists will tell you that the idea that women are, as the Romantics implied, incapable of violence, immune to sexual temptation, pre-disposed to self-sacrifice, and marvellously intuitive, is actually oppressive to women. They have a point. The Romantic ideal holds women to an unrealistic and higher standard of behaviour, and tells them that a range of options which have been arbitrarily defined as masculine, such as the intellectual life, business, and politics, are incompatible with being a proper, feminine, woman.

If you need convincing on this point, consider this. In order to engage in a masculine profession, of the law, Portia in Shakespeare's Merchant of Venice has, in a certain sense, temporarily, to repudiate her femininity: she dresses up as a man. St Joan of Arc does the same thing to be a soldier. The women of the late 20th century who went to work in the financial industry have done something pretty similar. To be taken seriously, they generally felt (and still feel) they needed to avoid dressing in a feminine way. The early 20th century 'blue stockings' of acedemia felt, in a slightly different way, that because what they were doing was considered unfeminine, they would make a virtue of it and make it clear, by the unfeminine way they dressed, that they didn't care. Now, I don't think either gender-specific vocations, nor people transgressing those boundaries, are necessarily unhealthy; it may simply be part of life's rich tapestry. What I'd draw attention to is the far narrower limits of femininity at the start of the 20th century compared to the start, say, of the 16th century. The influential 15th century scholar Christina de Pizan, or the 15th century painter St Catherine of Bologna, or indeed Portia when running her considerable household, did not feel it necessary to de-feminise themselves. The change of attitude had more than one cause, but it was crystallised by Romanticism.

A reassertion of the classic Romantic ideal of womanhood would, therefore, land Cuddeback in a lot of trouble with feminists, but he doesn't appear to be doing that exactly. What often happens with 'trad cons' like him is that their Romanticism has been through a feminist, politically correct filter. They want to give women all the good qualities without implying that the flip side of those very qualities also applies. Cuddeback's espousal of this approach is suggested by his claim that men should protect women, but not because women are weak. How does that work? Why could there be a special obligation to protect these feisty, gun-toting, modern females? Oh, because under all that bravado they are divine and good, and not bass-asses at all. This really doesn't make any sense.

The key word in the paragraph I quote above, however, is 'serve'. Men should 'serve' women, not (of course not!) because they are weak, but because they are superior. Now this is actually quite scary. Cuddeback thinks that men are by nature the slaves of the superior sex, just as some have held that certain races are by nature the slaves of a superior race.

What this is, I suppose, is an echo of the idea that men serve women as part of their leadership of the family, since in the Christian conception the leader serves the community he governs. Indeed, it is in this context, and only in this context, that the protection (etc.) of women by men makes sense. The problem is that Cuddeback makes no mention of male leadership. You might think that in a post about 'how to treat a lady' the potential or reality within marriage that, according to the Christian tradition, women are to obey and men to govern, would merit a mention. But not only does Cuddeback not mention it in this post, but a search of his blog, 'Bacon from Acorns', doesn't throw up any hits either. It has been airbrushed out of his view of male-female relations. 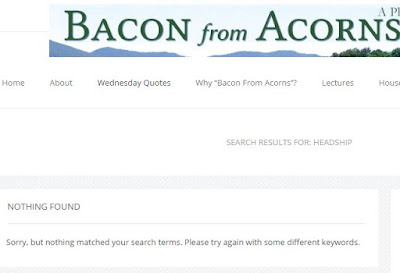 Fine, Prof Cuddeback, indulge your dark fantasies of female domination. But please don't associate them with the Catholic tradition. And, Sam Guzman, don't imagine they have anything to do with being a 'Catholic Gentleman.'

Labels: Masculinity and the Church