Supplement to the New Catholic Encyclopedia 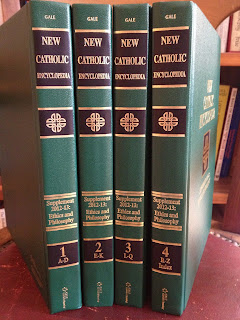 The 'New Catholic Encyclopedia' has just brought out a four-volume supplement on 'Ethics and Philosophy', I have just received my copy.

It looks impressive - and not just because I wrote the entry on Utilitarianism!

There are in fact quite a few philosophical reference books; this is a big one, and it is good to have something written from a Catholic point of view. I was encouraged, for example, to include a reference to the condemnation of Utilitarianism by Bl Pope John Paul II's Veritas Splendor.

If your university library doesns't have the New Catholic Encyclopedia, it should, for all its inevitable limitations. And now it should have the Ethics supplement too.

Much of what Wikiepedia has to say about Catholic matters is lifted from the old edition, published in 1914, which is online.