Last Tuesday was the Chesterton pilgrimage and Mass: in honour of his conversion and for the opening of his cause of beatification. I forgot to take my camera with me, but here are some photos taken by another member of the three-strong schola, which was led by Matthew Schellhorn, and some from my IPhone.

Fr Nicholas Schofield, the parish priest of this church, Our Lady of Lourdes, Uxbridge, has recently accepted our invitatation to become the Latin Mass Society's Regional Chaplain for the South East. He celebrated a Solemn Mass for the LMS Pilgrimage to Willesden which took place a few weeks ago. By the end of Mass, when the staggler walkers had arrived, there were about 50 people present. Their efforts to demontrate a cult of G.K. Chesterton seems to have payed off: only a few days later it was announced that the cause was being opened. So well done to Stuart (of Good Counsel Network fame) and his supporters for organising the pilgrimage and walking all those miles; I'm glad to have been able to support it by helping to sing at the Mass.

Here is a lovely statue of St Anne with the young Mary, learning to read the words of Isaiah: 'Ecce Virgo': Behold, a Virgin shall conceive... 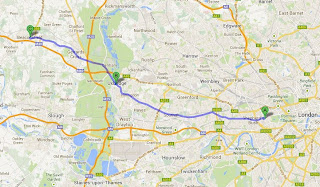 A couple more photos are here.

I don't know how closely Google's suggested route matched the one taken by the pilgrims, but they started from A, went to B (Our Lady of Lourdes, for Mass) and ended at C. A serious walk, much of it in very heavy rain. Their devotion has been rewarded!
Posted by Joseph Shaw at 11:10 am