The Direction of Worship and the Tabernacle

The issue of the relationship between tabernacle and altar, which I was discussing in my last post, has an added importance because of its implications for the direction of worship. In the words of the 1957 Decree Sanctissimam Eucharistiam:


In churches where only one altar exists, this cannot be constructed so that the priest may celebrate towards the people; but on that very altar, in the middle, a tabernacle for reserving the most Holy Eucharist should be located, constructed according to the norm of liturgical laws, entirely worthy in shape and size of so great a Sacrament.

The legal status of celebration ad orientem before the Council was complicated since the Roman basilicas have free-standing altars at which the celebrant has always said Mass facing down the nave - East. They are arranged so the morning sun comes in through the great doors, something very striking to early morning visitors to St Peter's. The tabernacle, of course, as at other great churches, is in a special chapel, where private prayer is much easier.

The historical reason for this Altar arrangement is that the builders wanted to have the altar over the tomb of St Peter (and other shrines in other basilicas); in addition, the need for the celebrant to face East was clearly paramount. What it certainly wasn't, was some attempt to draw in the congregation by letting them see what was happening on the Altar, make eye contact with them and so on. Nothing visible was happening on the Altar when St Peter's was first built - there were no ceremonies during the Canon - the the people may well not have been able to see the priest anyway. Later, the priest was obscured by a forest of candlesticks and the Crucifix. It's all on the FIUV Position Paper on worship ad orientem.

All the same, celebration versus populum could not be forbidden in the Church, it was done all the time in St Peter's itself. What was, for practical purposes, holding the line when the liturgical maniacs went on the rampage after the First World War, was the obligation, in smaller churches, to have the tabernacle on the Altar. If the tabernacle was fixed to the Altar, celebration vs. pop. was impossible.

It is interesting to note that it is this, and not the theological rationale for ad orientem worship which has become so familiar from the writings of Pope Benedict and others, which is the focus of discussion in the two documents from 1956 and 1957 to which I have been drawing attention. It is particularly interesting to see Pius XII's emphasis on the symbolic importance of uniting Altar and tabernacle, since this was directly contradicted by the liturgical establishment after the Council - Mgr Basil Loftus, of course, is still running their argument, now looking distinctly dated.

As I mentioned in my last post, however, Pius XII appeared to create a get-out clause, in his 1956 Assisi Allocution.

The question of how the tabernacle could be placed on the altar without interfering with celebration facing the people admits of several different solutions. On these the experts will give their opinion.

What sort of solutions? The mind boggles. But boggle no more: it was actually tried out. Hat-tip to Rubricarius for the bizarre photograph below, an Altar from the United States in the late 1950s. 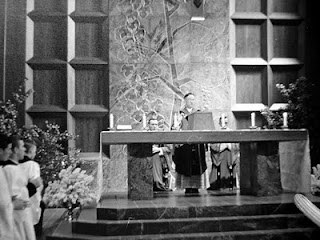 I must say that, looking at this, I can only say that in this experiment the hypothesis that the tabernacle could be fixed to the Altar 'without interfering with the celebration of the Mass facing the people' is tested to destruction. It can't be done. This cannot be described as an arrangement in which Mass facing the people is not 'interfered with'.

It is interesting to note that, as far as I can see, this is contrary to at least the spirit of Sanctissimam Eucharisitiam. This is not a situation in which the tabernacle has been put on the altar of a side chapel, and yet the Altar has been build for vs. pop. celebration. Pius XII had not had the chance to give any expert 'opinion' legal status.

On the other hand, it anticipates the ruling of the Instruction Inter Oecumenici in 1965.

91. The main altar should preferably be freestanding, to permit walking around it and celebration facing the people. ...

95. The Eucharist is to be reserved in a solid and secure tabernacle, placed in the middle of the main altar or on a minor, but truly worthy altar, or, in accord with lawful custom and in particular cases approved by the local Ordinary, also in another, special, and properly adorned part of the church.
It is lawful to celebrate Mass facing the people even on an altar where there is a small but becoming tabernacle.

In practice, of course, everyone could see how unsatisfactory built-in tabernacles on vs. pop. Altars were, and they soon adopted the alternative options.

I don't think it is a coincidence that neither Inter Oecumenici nor Sanctissimam Eucharistiam are on the Vatican website (though they are, of course, in the scanned on-line Acta Apostolicis Sedis, in Latin). The former is on the EWTN website and now the latter is on the LMS website. The way they contradict each other is more than a little scandalous, particularly with less than a decade separating them. Note that the option most directly contrary to Pius XII's firm argument, having the tabernacle on the wall without any Altar at all, is permissible only with the permission of the Ordinary. This nod to the fact that there is something grossly theologically problematic with this option, however, had no practical consequence, and this is the arrangement found in the great majority of Catholic churches around the country today. Contrast this with the demand of Sanctissimam Eucharistiam  when the tabernacle is not on the main Altar:

On an altar where the most Holy Eucharist is reserved, the Sacrifice of the Mass is to be habitually celebrated.

A similar argument, of course, can be made about the position of the crucifix. It is a long-standing principle of the ars celebrandi that the priest be able to raise his eyes to the Crucifix while saying Mass. The General Instruction of the Roman Missal says at least that there be a crucifix 'on or near' the Altar (308). There are, of course, various possible 'solutions' to this in relation to vs. pop. celebration. One was manifested in the 1960s fad for large, two-sided, crucifixes dangling from the ceiling, which the priest could see from the Altar; these peculiar things have, thankfully, mostly been coming down from churches over the last decade, if they've lasted that long; they were a pale reflection of the small number of magnificent historic examples which gave them their precedent, such as the one in Westminster Cathedral. Pope Benedict suggested, in The Spirit of the Liturgy, having a crucifix standing in the middle of the Altar between the celebrant and the Faithful. He tried this out when Pope, leading to what some wag on Pray Tell memorably called the 'caged celebrant' arrangement; Basil Loftus, not being blessed with a sense of humour, simply became incoherent with rage.

This is a good example of a principle of the liturgical reformers which has had endless unfortunate consequences. Clear arguments in favour of celebration ad orientem were not being put forward in the 1950s, but it was part of a liturgical system which was theologically coherent and worked practically. When celebration vs. pop. suddenly became desirable, it seems that every other liturgical principle had to be sacrificed. The attempt to tie oneself into knots to celebrate towards the nave and maintain the other principles carried, and still carries, the risk of making the Reform of the Reform crowd look silly.

The argument in the Pontiff Emeritus' The Spirit of the Liturgy is, in fact, that visual interference with vs. pop. celebration is not a problem because seeing the celebrant from the front is 'of no importance'; the 'Benedictine arrangement' is simply a step towards the celebration ad orientem. Now that the Pontiff Emeritus, and other scholars such as Fr Lang in his 'Turning towards the Lord', have given us overwhelming arguments for celebration ad orientem, there is no longer any excuse for these strange compromises.