Corrupt bishops: why it is a problem: Part 3 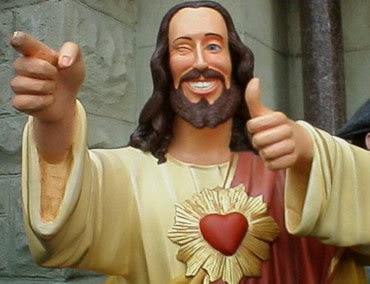 I ended my last post by saying that, when they elected Bishop Conry as chairman of the department of Evangelisation and Catechesis in 2009, the bishops of England and Wales were fooled. What, exactly, were they fooled by, and how can we avoid falling into the same trap?

Conry is not a pantomine villain. Fr Alexander Lucie-Smith, a priest of Bishop Conry's diocese, Arundel and Brighton, reminds us

He was very popular with many people, and his kindness to the sick on the Lourdes pilgrimage and his rapport with the young will be long remembered.

Many traditional priests and Faithful in Arundel and Brighton saw another side of his character; Bishop Conry's open-mindedness did not extend to the Traditional Mass. It must be said that Bishop Conry was a divisive figure, and leaves a divided diocese: feelings about his resignation are, well, polarised. Nevertheless, the fact remains that for many, he was just terribly nice. He didn't stand on ceremony, he was relaxed, he had friendly chats with those on the margins of the Church and they came away from these meetings with a happy feeling, he accommodated himself and his diocese to the adoption of children by homosexual couples, he was capable of warm friendships... Aren't you beginning to see the problem?


Serial adulterers are charming. Of course they are: they wouldn't succeed in becoming serial adulterers if they were not charming. Another category of people, a group we have become familiar with in the Catholic Church, who are associated with very powerful charm, are paedophiles. I'm not joking; it is very often part of the package. The handful of clerical paedophiles I have encountered (as someone associated with various Catholic institutions for nearly 30 years, not a scientific sample of course), have all been extraordinarily charming, at least when they chose to be. They have also had a certain selective zeal; Lourdes featured in one case. Drawing people in from the 'peripheries' was something they were good at; making people who had decided they had 'problems with the Church' feel, at least, that they could relax in the company of a priest, have a drink, have a gossip, and maybe begin to think that the Church isn't all bad after all, while the priest sagely agreed that there were problems with the Church's teaching, but after all one shouldn't throw the baby out with the bath-water. I won't be at all surprised to read people in The Tablet suggesting that Bishop Conry's moral failings made him a better, more approachable, more human, more sympathetic bishop.

This is what I want to point out: this approach is not the solution, it is part of the problem. One of the distasteful things about the obituaries of Fr Kit Cunningham, the Rosminian who was revealed to have been a paedophile when the ink on these was scarcely dry, was the fact that they showed that he was loved - by his friends - for his vices, not for his virtues. He clearly had a problem with alcohol, for example, and everyone thought it was terribly endearing. It was his vices which drew people in. But you don't draw people in to Christ by your vices. You might draw people to yourself, or even to your little club, your institution, or some favourite ideas, but you don't draw people in to Christ, because it is not in each other's vices that we encounter Christ.

I believe this is a genuine theological error liberals make. They often feel uncomfortable with the idea that Christ was sinless, they think it suggests Christ was inhuman. (They often have a similar problem with Our Lady.) They prefer a sort of Friar Tuck figure, whose moral weaknesses help us identify with him, make us sympathetic, perhaps even make us pity him and want to look after him, make us, as they see it, more open to the message he might carry. But, once this is all made explicit, it must be obvious that this is wrong. It is sin which makes us inhuman; it is Christ who shows us what perfect, undefaced, humanity is, and when we see a good action or a truly good person, we can catch a glimpse of Christ. And that can be a little scary, because when we see Christ we are forced to make a decision. And it can be divisive, because not everyone looking on will make the same decision.

The liberal ideal is the priest or bishop who is flawed, who has vices, perhaps he like a drink a little too much, or the ladies, or the boys, he likes a gossip and he's amusingly rude about those he and his chums agree are in the wrong, and he struggles a bit with his faith, but he is informal and warm and terribly nice - at least to his friends - and the enjoyment of the cosy glow of the circle around him is a sort of liberal sacrament. We all know such people.

What they don't like are the chilly virtuous types, the ones who maintain their priestly dignity, who have psychological boundaries, who call evil by its name and make you uncomfortable by forcing you - perhaps very gently, but all the same - to make a decision with a clear mind between right and wrong. Actually, good priests can have friendships and laugh too, but the liberals have accepted the anti-Christian idea that only naughty things are nice, so they discount that possibility.

Bishop Conry fitted the liberal ideal, or enough of it. What we need to get clear about is that it is not a good thing for priests and bishops to present themselves in this way. It is not going to help evangelise England. The young people and the dissidents may have warm feelings about such clerics but warm feelings are not going to get them into heaven. A good priest or bishop does not eschew charm, he doesn't reject friendship, he doesn't neglect the things which might draw people into beneficial social circles and the like, but when push comes to shove he is prepared to allow people to have that uncomfortable feeling that something, their salvation, may be at stake, and not just charmingly change the subject.

In choosing the new chairman of the Bishops' Conference Department of Evangelisation and Catechesis, I hope the newly refreshed body of the Bishops of England and Wales can bear that in mind.